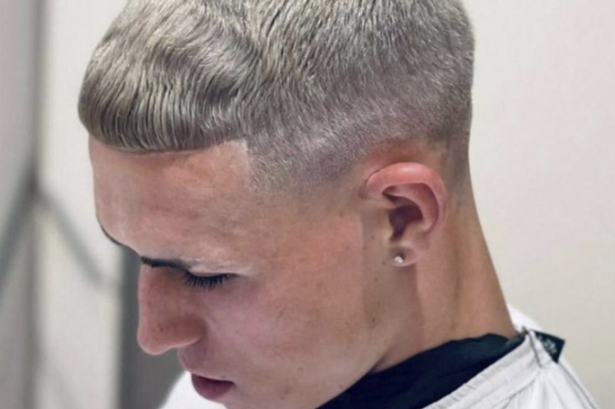 Phil Foden of Manchester City, tells us his viral Phil Foden haircut was nothing to do with Gazza’s Euro 1996 hairstyle, or Eminem for that matter.

The power of the people made this haircut photo go viral on social media and Foden just said it was simply just time for a change.

The grounded England midfielder has become an International favourite since playing along side Hairbond endorsers Jack Grealish and Jordan Pickford.

Most recently promoted by U21 England goalkeeper James Trafford and midfielder Lewis Keane Potter as well as the U23 England keeper Joe Bursik, another future England star..

Just in time for the summer EURO2020 competition, Phil Foden haircut was bleached so that his short cropped hairstyle reminded England fans, taking them back 25 years to the much loved Euro 1996 tournament, in the days when England’s Paul Gascoigne (widely recognised by fans as the most talented English footballer of his generation) ran the headlines for his bleach blonde hair and unforgettable England performances.

The first photo appeared on social media late on Sunday 6th June 2021, which shows Foden waiting for his hair dye to transform into the finished style.

If you’re looking for inspiration and you would like to get the most out of your bleached blonde Phil Foden hairstyle, first you need to make sure that you are happy to look after it.

This means conditioning, as looking after this type of hair is key, otherwise you will end up with a bushy, brittle and dried out look; which is far from desirable.

This is why we recommend a first application of the Hairbond Wonder Professional Hair Primer Spray. With 7 benefits, this wonderful product helps you maintain your new bleached hair, so that you can be off to the best start.

As for final styling, for hair like Phil Foden, you need something low or close to zero shine, just enough that the texture in the crop style can catch the light. For this we recommend a small application of the Hairbond Super Professional Hair Fibre.

The second photo of the new Phil Foden summer hairstyle emerged later with the final results, a mixed combination of blonde, white and silver with a slightly dark natural undertone in places.

Not only did Foden play a main part within the Manchester City squad this season, which regained the Premier League title, but he also helped City keep the Carabao Cup for the fourth season on the trot as well as reaching his first-ever Champions League final.

Man City’s Pep Guardiola said Foden is the “most, most, most talented player I have ever seen in my career as a manager” and the 21 year-old was further recognised when he was named “2020/21 Premier League Young Player of the Season”.

Have you got the bottle to dye it blonde like Phil Foden this summer?