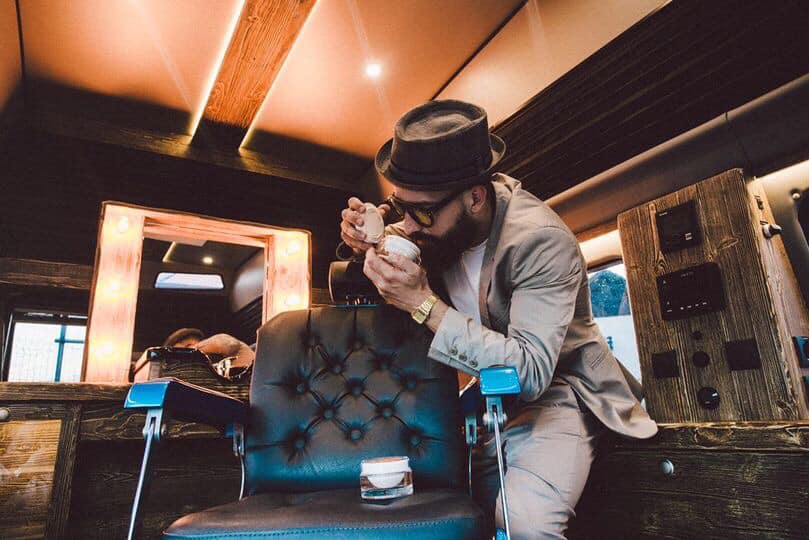 One of the most recognised and most rewarded barbers in the industry from Slovenia, Luka Nebec is widely known for his super-stylish approach to men’s hairdressing.

Renowned for his clear lines, precision and the ability to foresee trends in mens grooming, Luka has become Slovenia’s most respected barber.

Whilst at the forefront of the barbering industry, Luka runs his very own “barbershop on wheels” (a 6.5-litre/1971 Chevrolet Chevy) and is also the source of Hairbond products to Hairbond barber partners across the whole of Slovenia.

He gained hairdressing experience throughout his schooling years in Mič styling salons.

Constantly following the trends, Luka quickly noticed a growing interest among men in wearing mustaches and beards. He noticed that Slovenian men mostly had very poorly groomed beards, which really ignited his interest in shaving. Soon after, he traveled to the famous Las Vegas for his first barber training and bought his first razor.

Shortly after that, he started shaving his friends and first customers in the salon where he worked. He completed an intensive shaving course at the London School of Barbering, one of the most renowned barber schools in the world. Luka says that you learn the most in life if you do things with all your dedication. That’s why he’s truly mastered shaving today … even with closed eyes.

The Shavy Barber Van is exactly what you imagine and, at the same time, nothing like it because there has never been anything similar in Slovenia.

Traveling barbershop is a term you could put on it, but Shavy barber van is much, much more.

Shavy is a 1971 Chevrolet Chevy, which with its 6.5-liter engine, belongs to the eternal automotive classics.

Under Luka’s creative direction, however, it underwent an advanced technological transformation. With a sophisticated interior, a real barber’s chair, and top-quality hairdressing equipment, it has become a real “Man cave” on wheels.

With Shavy, Luka will bring the culture of shaving to bearded people all over Slovenia, and above all, he will continue to educate and train future generations of gentlemen.